One thing which has really surprised me since coming to Spain is how excited people seem to be about Halloween. A few weeks ago, I noticed isolated decorations appearing in shop windows, but by Thursday almost every store in my neighbourhood seemed to have been gripped by the fever (including the gluten free cafe, which had these cool cupcakes that I simply HAD to try 😉 ). 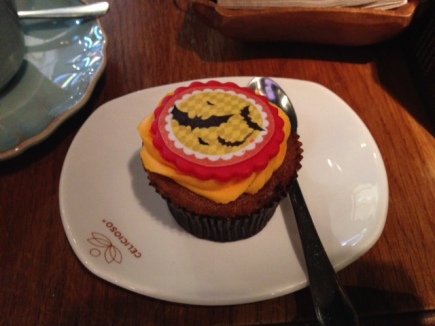 How I suffer for my art!

My school was not immune to the collective fervour, and for the past two weeks, all attention has been focused on the annual Halloween fiesta. From what I can gather, this fiesta seems to follow the same rules every year, namely:

1. Each class participates in the Best Decorated Pumpkin Competition, which involves the students (or, more often than not, the language assistants like me) painting a pumpkin as some kind of character. This year, there was The Joker and M & Ms (for Monica and Mari Carmen, the two Year 4 teachers). 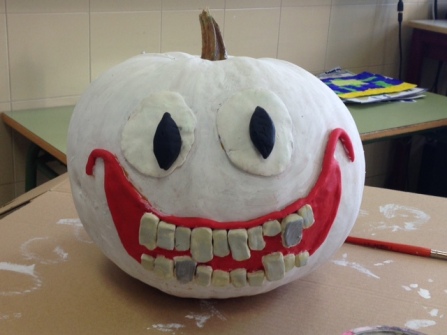 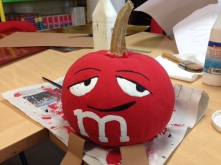 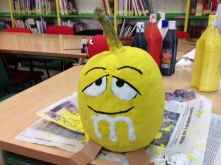 2. It is compulsory for every teacher to decorate their doors in the appropriate Halloween style. Some of them are crazily competitive, and want to have the best door EVER. Cue considerable angst about originality and whether anyone else’s looks vaguely similar. 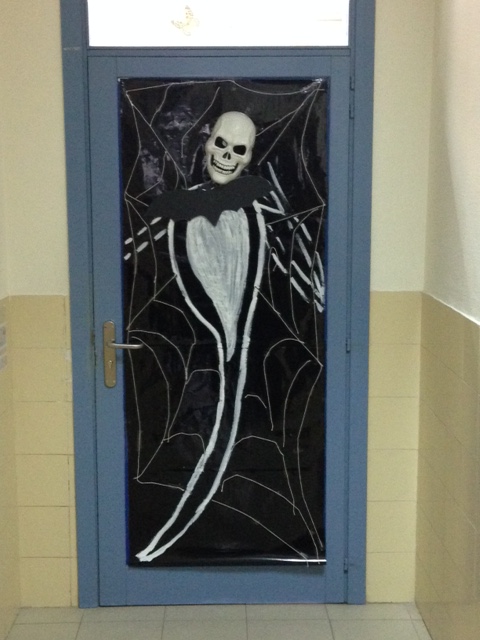 3. After lunch on the Friday before Halloween, there is a “Halloween ball.” Everyone (and I mean EVERYone) is expected to dress up in some crazy costume, and sit outside in the sun for an hour while all the year groups perform their “special Halloween dance.”

Friday was my day off, but it was made very clear to me that if I didn’t go to the Halloween ball, it would NOT be viewed kindly.

So, on Thursday night, I found myself at the closest discount store, trying to assemble a costume with a minimum of both effort and cost. I decided to go as a witch (boring, I know), as I could wear my long, black flamenco skirt, and all I’d have to buy was a wig and a witch’s hat. But all the long black wigs were sold out, so I ended up with a wavy silver and black variant. And the only hats left had absolutely repulsive purple bows on them (what kind of witch wears a hat with BOWS?!), so I spent most of Thursday night removing said bows, and chucking them in the bin.

Although I was annoyed at having to go to school on my day off, I actually LOVE dress up parties. I find it strangely liberating to totally change your appearance, and see how others’ reactions alter. 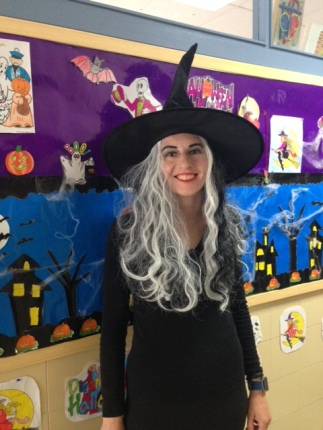 Here’s me in my witch costume

Almost all of the kids were in fancy dress, and they looked fantastic. 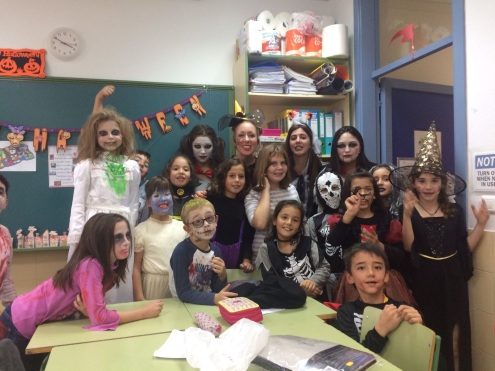 Class photo. At the back, with the white make up, are two of the other language assistants, April and Marcy. The girl with the pointy yellow hat, Jenna, is also an assistant. Michaela, in the white dress, is a character from “The Exorcist”. The girl with the blue face is Marta, the smartest student in the class BY FAR. She’s about 2 grades ahead of the others. She’s one of my favourites. 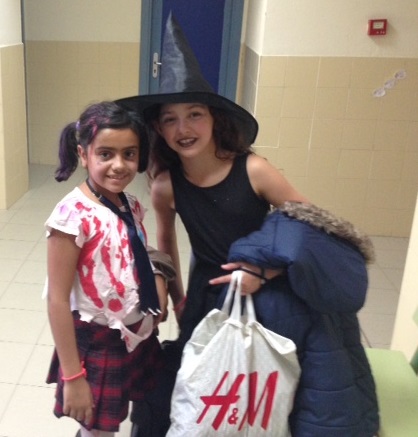 Two of the girls from the Year 4 class

And some of the teachers had made a pretty big effort, too. This is Mary, who looked COMPLETELY different! 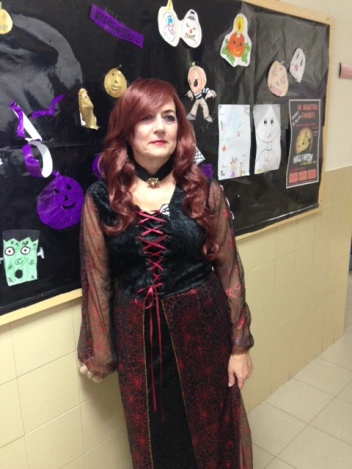 The only problem with the disguises was that some of the kids didn’t know who I was. I went to the kindergarten class to say hello to Fernanda and Camila, and they had NO IDEA. This made me so sad. In desperation, I got out my glasses, and Camila yelled “HELEN!” and began immediately racing around and being mischievous, as per usual. Phew! 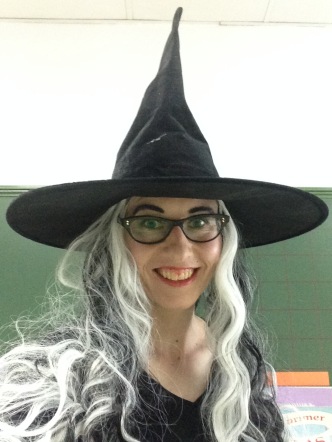 The dancing was a bit of a disaster, to be honest. Because it was so hot outside, and we were all decked out in our 100% polyester costumes, nobody was really paying much attention, and were too busy trying to find a modicum of shade.

Overall, Halloween in Spain has been an interesting experience. But let me just say, if I EVER have to hear/see/do The Skeleton Dance again, I will throttle whoever is responsible!!!