I have been very lax with my blog these last few days, but I thought that today I would write about what I did on my birthday.

When I decided to come to Spain, I was acutely aware that I would be having my birthday quite soon after arriving, and that it would probably be a bit difficult. Although it may initially seem glamorous and exciting, moving to a new city and trying to make friends is actually REALLY hard. Consequently, I was worried that I wouldn’t have much to do on Friday, particularly as I don’t have work that day. And when I don’t have much to do, I tend to think too much. And that leads to a depressing downward spiral.

Did I miss Australia and my family and friends? Yes, I did. A lot. I think birthdays and Christmas are particularly hard if you’re overseas. But did I have a nice day, regardless? Yes, definitely.

So what did I do?

In the morning, I spoke to Mum on Skype, and then I met my friend Kerly at the Madrid Town Hall. We went to see some great exhibitions there, and to admire the architecture, which is nothing short of amazing.

Then we went to the rooftop terrace and had a celebratory drink, as we looked over the Plaza de Cibeles, and up towards the city centre.

In the afternoon, I met my conversation exchange partner, Carlos, and we went for a walk past the Royal Palace, the Madrid Cathedral, and the historic walls of the city. We then stopped off at Sol for a delicious Italian ice-cream, because, well, it isn’t a proper birthday without ice-cream!

Finally, in the evening, my friend Jan invited me to go to the Madrid Food Markets. Jan is a professional chef, and teaches cookery at college, so he was keen to go and try the 20 different types of tapas. I let him choose what we ordered, and we tried three dishes, including prawn empanadas, some kind of cutlets, and a fancy truffle mash. I’ve got to admit, the finer qualities of the dishes escaped me, but Jan rhapsodised about the “unique flavours”, so I assume they were good. 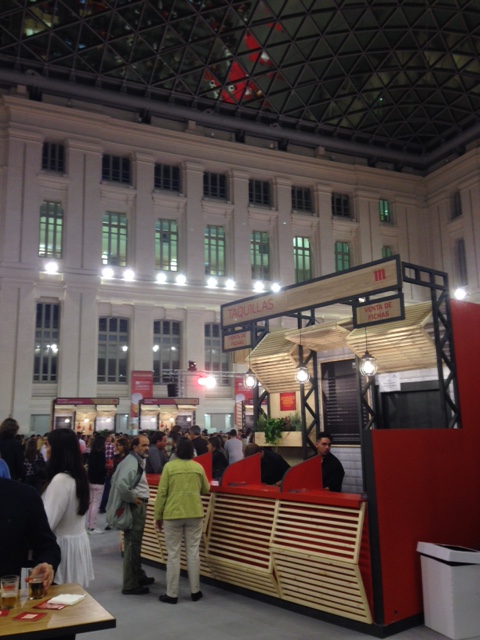 Yesterday, I went shopping, and I bought myself a present with the money which my Mum had sent me. It’s a cute jumper with cats on it, and I’m wearing it today 🙂

So, all in all, I will give the birthday the thumbs up, although I don’t want another one for a while, given that I am now closer to 40 than to 30! (How crazy is that?)

When I first visited Spain 4 years ago (2012! Can you believe it?), the offerings for people like me with Coeliac disease were a bit limited. I could buy bread and pasta from the pharmacy (!), but that was about it.

Two years later, when I came back again, things were better, and there were lots of gluten free products in the supermarket.

But this time, things have REALLY improved, because a Spanish chef who has Coeliac disease has opened up two new cafes in Madrid which only sell gluten free products. This is the website.

This is the cafe on Calle del Barquillo

And, miracle of miracles, the things there actually taste decent. Well, more than decent. I am scared to say it, but they are GOOD. This is a pretty major achievement, given that the majority of gluten free food has the taste, texture, and general appearance of a piece of soggy cardboard. Not that I’ve eaten soggy cardboard myself, but you get the idea…

Since a friend showed me these cafes on my fourth day in Madrid, I have been back five times.

The first three times, I had cupcakes, but then I decided to branch out with the lasagne:

And the steak sandwich:

Everything I’ve eaten has been great. Apart from the coffee, which is absolutely appalling. I guess I can’t have everything.

But all this pales into insignificance when we get to the pièce de résistance– the toilets. See, the cafe on Calle del Barquillo is next to a five star hotel, and because it doesn’t have its own toilets, diners are “forced” (although that makes it sound like we’re suffering here) to use the hotel’s facilities.

And let’s just say, they are somewhat palatial.

Sneaky shot of the toilet entrance that I took yesterday.

In order to get to the facilities, you have to walk through a lobby, which is filled with comfy chairs and with bottles of champagne on the table (perhaps they know that the coffee in the cafe is undrinkable?). You then casually press a mirrored door, which opens to reveal this fancy pants bathroom, which is all posh tiles, waterfall taps, and expensive fittings.

In fact, I would even say that it is worth visiting the cafe simply to use the toilets. They are THAT good.

So next time you’re in Madrid, and looking for somewhere nice to go (“to go”- see what I did there?), all I can say is, remember Celicioso on Calle del Barquillo 🙂

I’m not too sure if anyone remembers my previous blog, where I wrote about a particular issue that I kept experiencing in Sydney, namely, people assuming (wrongly) that I am a lesbian.

I had expected that when I came to Madrid that this issue would dissipate. (I should add a disclaimer here that I am not, in any way, unhappy to be mistaken as being a lesbian. If I was one, I would be delighted! But the problem is that I am not, but people seem to believe that I am, and I honestly don’t know why).

Case in point. The other day, I was catching the Metro to my school, when a lady sat down opposite me. There was lots of space in the carriage that day, but I didn’t really care. However, as the journey went on, I became aware that she was watching me. Very, very closely. I looked up, and she smiled at me. So I smiled back. Then she raised her eyebrows at me, invitingly. I didn’t know what to do here, so I smiled away. She kept looking, and raising her eyebrows, until I realised that she was trying to make a move, and I looked away.

Then, tonight, I went to a conversation exchange meet up. I was talking with an attractive English lady, and in the course of the evening, no less than three men came up to her and offered their numbers. They totally ignored me. It was as if I was a non-person. The only person who came to talk to me was a lady who declared herself to be (you guessed it) interested in other ladies.

Look, I am flattered. I love that people are interested! But I honestly don’t understand WHY! Why do some people seem to assume that I am a lesbian, when I’m not? Is it my hair? My clothes? My general attitude? Some other inaccurate cliched idea? I honestly don’t know, but it’s fascinating that the same thing seems to happen in Spain as in Australia. 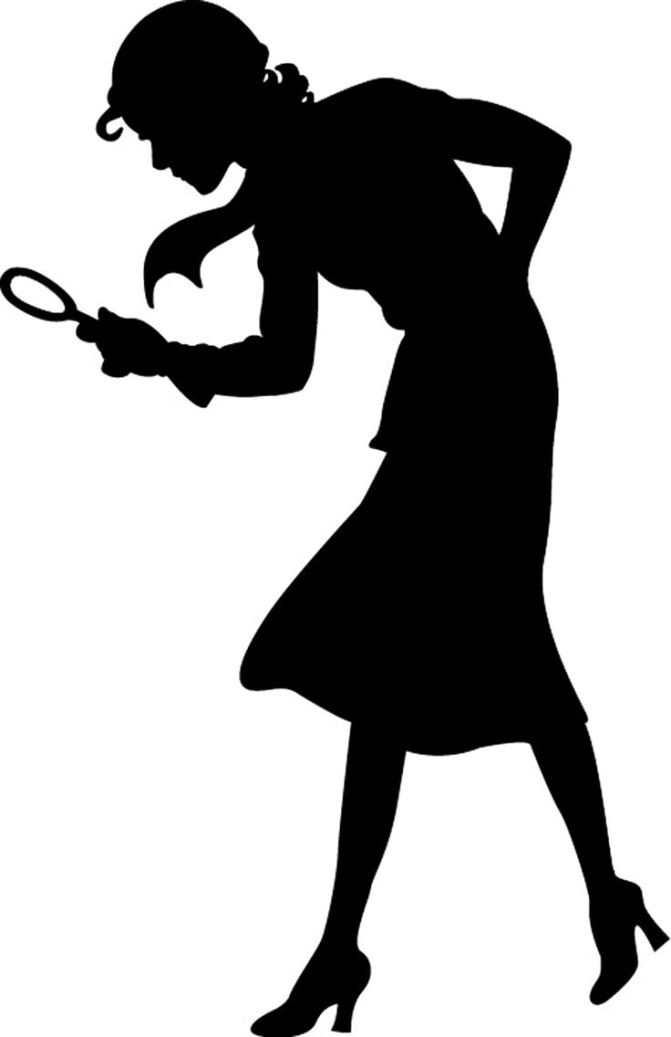 I’m not upset by this, but I would love to know what it is that I’m doing that is repelling the men, and attracting the ladies! Any ideas very welcome 🙂

(Today’s blog post is a bit different, as I realised that I am taking lots of photos but then not writing about them! So I had to address that…).

Last week, when I was haunting the tourist info centre in search of exciting places to go, I picked up a brochure about Miguel Cervantes, the author of Don Quixote. I read Don Quixote last year (it took me FOREVER), and although I wouldn’t say it’s my favourite book ever, historically, it is very interesting, and Don Quixote’s escapades are endearing in a way (he’s also incredibly annoying, and numerous times, I almost gave up on the book as he did yet another ridiculous thing). 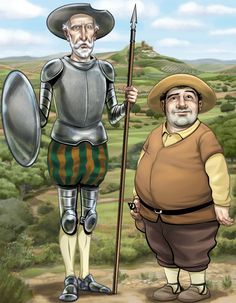 Cervantes was born in a town called Alcalá de Henares, 30 kilometres from the centre of Madrid, and the house he was born in has been turned into a museum. So today, as I wasn’t doing anything, I decided to go on a little excursion there.

I walked to Atocha, the central train station, then caught the first service to Alcalá de Henares.

This is the corner of my street, Calle de Santa Engracia 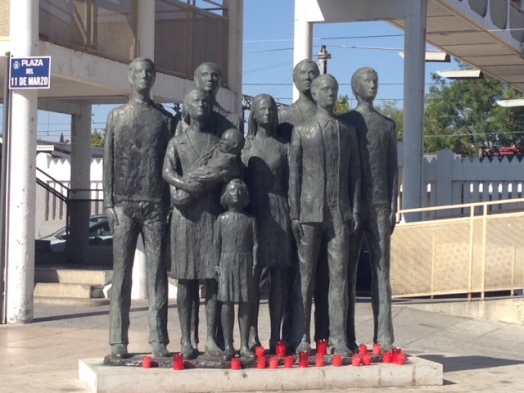 I then walked up to the Cervantes birthplace museum, getting somewhat lost along the way (it wouldn’t be a proper excursion without at least one moment of blind panic that I don’t know where I am). 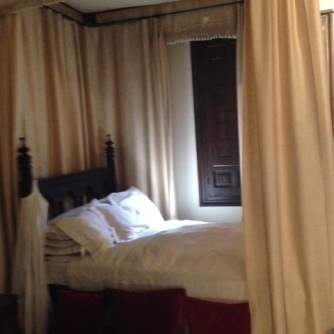 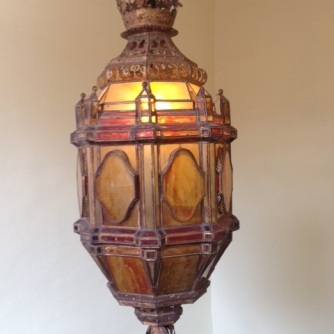 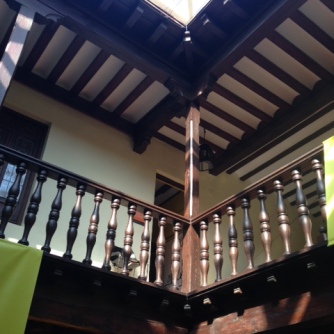 The inside of the house was really interesting, as they had set it up so that it was just like it would have been when Cervantes was born in 1547. It was particularly intriguing to see the room which was set up like a doctor’s surgery, as Cervantes’ dad used to run a medical clinic, specialising in “blood letting” (not too sure what this involved, but it doesn’t sound particularly pleasant).

Afterwards, I had to pose for my obligatory tourist shot with the Don Quixote and Sancho Panza statues. (Random observation- it seems like statues which you can pose with are quite popular in Spain. There was a big queue lining up for these ones, so I had to sneak in quickly, thrusting my camera at some friendly fellow tourists as I did so). 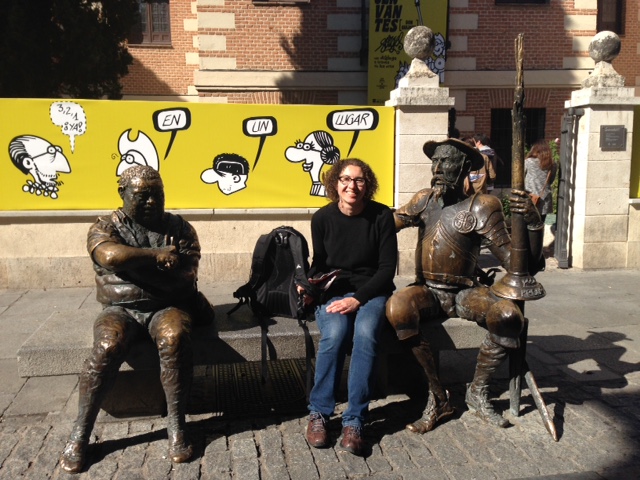 I then wandered around the rest of the town, which has some very impressive architecture. 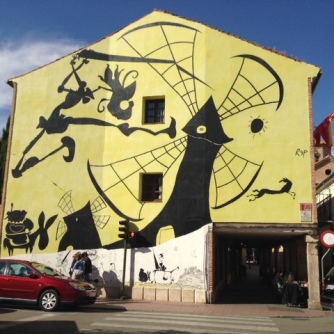 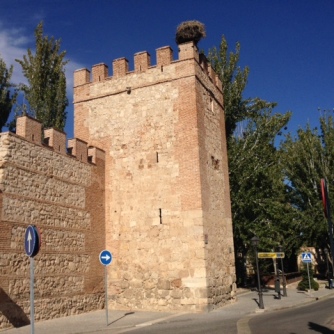 Then I caught the train back to Atocha, and walked home again.

Seriously, how amazing are the buildings? These were opposite the Retiro Park.

Overall, it was a really good day, and now I can say that I’ve seen the birthplaces of both Federico García Lorca and Miguel Cervantes. Maybe I should do a Spanish literary birthplaces pilgrimage?