For the past few months, I have been practicing my Spanish online with a Chilean guy named Mario. When I told him I was coming to Spain, he gave me the contact details of a former colleague, Anita, who now lives in Madrid. “She’s really nice,” said Mario. “You should contact her.”

I felt a bit awkward, but I did. I sent her a message introducing myself, and we had a bit of a chat. She asked if I was busy today, and when I said no, she invited me to join her and her husband, Cristian, in their township, Las Rozas (it’s about 30 minutes out of Madrid) for the celebration of the day of San Miguel.

So, I walked to the main station in Madrid, and caught the train out to Las Rozas.

Anita and Cristian met me there, and we headed into the town centre, where there was a massive crowd of people lined up against some barriers. “This is it!” Anita said. “It’s the corrida, the running of the bulls!”

On the bull running street were a number of men, dressed in athletic gear, engaging in a variety of stretches to prepare for the run. After about 10 minutes, a loud explosion sounded to warn the crowd that the bulls would soon be released. And sure enough, out trotted four white and brown bulls, with huge horns, and bells around their necks.

These were the “guide bulls.” They proceeded at a leisurely rate.

I was a bit disappointed, as the “fierce” bulls weren’t all that fierce. In fact, one of them insisted on stopping, and returning back to his pen, as he clearly wasn’t interested in any kind of running. 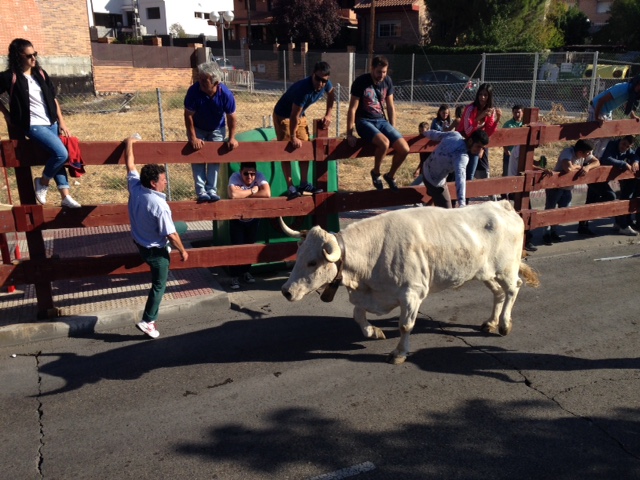 This bull didn’t want to run, so he headed back to the pen. Fair enough.

But the man next to me explained that these were the “guide bulls”, who would lead the way when the “fighting bulls” were released.

The guide bulls made their sedate way up the road, and when they reached the top, the starter’s gun sounded again, and this time, it was for real. It was amazing to watch the men start running as the guide bulls rounded the corner, this time followed by two fast, fierce, and very dangerous black fighting bulls, which seemed to be almost flying through the air.

Even though their horns weren’t as big, they more than compensated for this by their general demeanour.

This is one of the “flying fighting bulls.”

After the run, Anita and Cristian showed me around the town, and then we went and had some tapas with Anita’s 84 year old grandma, who kept receiving calls on her smartphone while we were there, and who seemed to have the most active social life of anyone present. 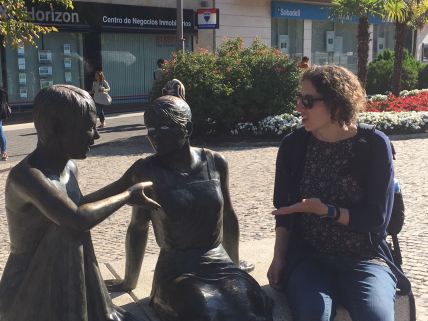 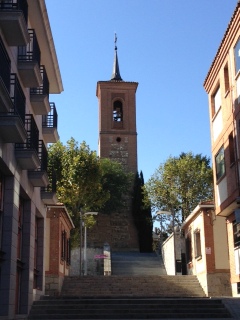 Me and some friends; The Church of San Miguel

Overall, it was a wonderful day, and it was a real joy to be able to meet such lovely people. It makes a HUGE difference to feel welcome and accepted 🙂

2 thoughts on “The running of the bulls”